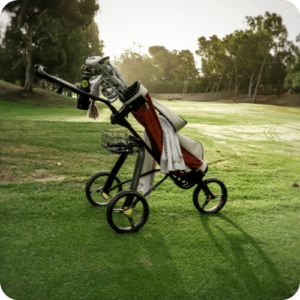 However, the amount of golf clubs you should carry is a bit of a tricky question. Some golfers may use all 14 clubs, especially if they play on a longer or more intricate course.

On a course with shorter distances between holes, the club selection will not be crucial for success.

What Happens If I Have Too Many Clubs In My Bag?

Breaching the 14 club limit can cause dire effects on a round. For instance, at the 2001 Open, Ian Woosnam had 15 clubs in his bag which most likely cost him the championship.

The penalty for having too many clubs in your bag is two penalty strokes for each hole that you had more than 14 clubs. For instance, if you played hole one with 15 clubs and realized the error before beginning play on the next hole, two strokes would be added to your last score.

It is always worth double-checking your golf bags before you tee off, especially if there is a lot on the line!

Is There A Minimum Number of Clubs I Need To Have In A Set?

Nope! There is no minimum number of clubs you can have in your bag. However do you really want to carry a golf bag around with only a 7 iron and pitching wedge?

A golfer can take as many golf clubs in their set as they want, so long as it is below 14 clubs.

Some golf bags, like Sunday golf bags aren’t able to hold as many clubs.

The rules state that if you have 13 clubs (or fewer), you can add a club to your bag up to the limit while playing your round.

It wouldn’t be a bad idea to start with only 13 clubs and add the necessary club if you get caught in a sticky situation.

What Clubs Should a Beginner Have In Their Golf Bag?

At the start of a round, you should at least have a driver, putter, wedge, and some irons in your golf bag.

Most golfers consider these twelve golf clubs the basics, leaving two more clubs to add to your bag at your discretion.

Typically these different clubs are varients of a wedge. If you are a beginner or your ball tends to be magnetized to the bunker (we’ve all had those rounds), then adding a sand wedge would probably be ideal to have the loft needed to clear the bunker.

Or, if you are playing on a particularly long course, a gap wedge may work to bridge the gap between a sand wedge and a pitching wedge.

Check out our review of the best wedges here.

But, if you are a particularly unique golfer, you can have a driver and 13 putters if you want. There are no rules on the kinds of clubs you have in the bag.

In short, no. Sharing of another player’s clubs is against the rules. A beginner who is just playing with friends can totally do this though, and it is a great way to start. That is how I originally got into the game!

In a more serious golf game or golf tournament only clubs you may make strokes within the course of a round are the clubs you start playing with or add to your golf bag (below the 14 club limit).

I know it may be tempting to ask your friend if you can use that driver that he has been smoking balls with all day, but this would be considered a breach of the rules.

What Happens If I Damage My Club On The Course?

You can replace a damaged club so long as the damage is caused by outside or natural forces. If, for instance, you have a terrible swing that ruins the head of your driver, you may not replace this club or borrow another players club for the remainder of the round.

However, in the instance that the wind knocks over your bag and breaks your driver, you are allowed to replace it.

What If I Find A Club That Another Player Left Behind?

If you come across a club on the fairway that another player left behind, you may pick up the club and put it in your bag.

A good practice for this instance is to put the clubhead face down in the bag to make sure you do not use it by accident.

There will be no penalty for carrying a club out of good faith for another player who mistakenly left it behind, but using the club will cause a penalty.

Can You Carry Two Putters In Your Golf Bag?

Yes, you can carry however many putters you want! Putters count as clubs, though, so as long as the amount of clubs in your bag is less than 14, you are good to have as many putters as you want. That goes for any club. You can have two drivers, five 3-woods, or 12 putters if you so choose.

What Is the Maximum Number of Golf Clubs You Are Allowed to Carry in Your Golf Bag?

You’re allowed to carry a maximum of fourteen golf clubs in your golf bag.

What Is the Penalty for Carrying for More Than Fourteen Clubs in the Golf Bag?

What Fourteen Clubs Should I Carry in My Bag?

The fourteen relevant clubs for you to carry in the bag are one driver, one 2 or 3 hybrid, one 3 wood, a wedge set (gap wedge, lob wedge, and sand wedge), seven pitching wedge, one putter.

What Are the Different Types of Wedges in the Golf Bag?

●      Gap Wedge: It is used for long distance shots, like 110 yards that cannot be performed by the other wedges.
●      Sand Wedge: It is most commonly used wedge. This is also used to hit long-distance shots, but the main advantage is that it helps to chip the ball up in the air.
●      Lob Wedge: This is similar to the sand wedge, but the extra advantage is that it helps in spinning the ball to guide it back to the hole.
●      Pitching Wedge: This is more of the iron category and is usually sold with the iron set. This helps with long-distance shots like the other irons.

How to Keep My Golf Clubs Clean?

Golf clubs are expensive items, so you should be able to maintain them. Maintenance itself is not expensive though. After every shot, you should clean the clubface, even if it means carrying a towel.

The grooves can’t be accessed with a towel, so use a tee. In summer, the shaft becomes greasy because of your sweating from the grip. Make sure to wipe it with a warm water towel when you get home.

What Is a Fourteen Way Golf Bag?

Quite self-explanatory, a fourteen-way golf bag is one with fourteen compartments or dividers for the fourteen golf clubs that you’re allowed to carry in the course.

What is the general advantage of using a fourteen-way golf bag over four or five-way bags?

The general advantage is that a fourteen-way golf bag will keep your clubs separated from each other will make it easier to pull out faster during the game, and is likely to prevent club chatter while walking.

Organization is always an important skill and when it comes to golf, it is ever so important. Having an organized golf bag with each club in its own place helps a player keep his cool during the game. They can pull them out easily without wasting time.

A fourteen-way golf bag with all your fourteen clubs in place also ensures you need not borrow clubs from your fellow players. This need to borrow could arise because you have not been able to find the right club from the mess in your bag.

Do remember to keep your clubs clean, as cleanliness is the first step towards having an organized golf bag.

What Is The Best Golf Ball For Women?