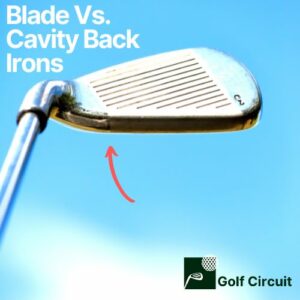 There’s nothing quite like receiving a new set of irons and gradually getting acquainted with them at the driving range.

However, if you’re a beginner or are fairly new to golf, you’ve probably wondered – Should I be playing with blades or cavity backs?

The shiny, sleek look of a set of blades may be very appealing, but unless you’re a fairly experienced golfer, they probably aren’t the best choice for you.

So, let’s take a close look at the positives and negatives of blades vs. cavity back irons, as well as some other similar irons, as it will help you decide which is the best option for your game.

Blade irons are much thinner by design than cavity back irons and have a resemblance to the blade of a knife, which is how they get their name.

They’re forged from carbon steel, shaped by hand or machine, and then plated with chrome.

The sweet spot on a blade iron is small but very effective, and they are popular with professional golfers due to their extreme accuracy.

They give great feedback on any mistakes you make, but they’re also very unforgiving, which means they’re not the ideal choice for an average golfer.

One of the reasons blades are so popular amongst pro golfers is that they offer a lot more control of the trajectory of the golf ball. This won’t be as important for average golfers but is vital for professionals.

Blades are very thin, which means that they vibrate if you hit the ball incorrectly, which provides feedback on your swing. This is particularly helpful for off-center hits.

Blades are particularly good golf clubs for golfers who want to hit lower shits which is especially important when playing in windy conditions.

Being able to hit lower shots also makes for better accuracy and predictability.

This one may be a bit more subjective, but many golfers are of the opinion that forged blades simply look a lot better than cavity back irons due to their sleek and shiny design. We’ll have to let you decide on that one.

For most golfers, using blades means that the club head speed will be slower, leading to the lower launch angles associated with blades.

This means that the majority of golfers will generate less distance with blades than they do with cavity backs.

Although it’s generally easier to shape shots with blades than with cavity backs, if you have an issue with slicing or hooking the ball, these shots will curve even more due to the high spin rate that blades generate.

Blades are a lot harder to hit than cavity backs due to the fact that the center of gravity is close to the club face, and there is also less weight behind it. This means you’ll be punished more for any mistakes.

The fact that blades are forged means that they are usually more expensive than cavity back irons. The cavity back is a cast golf club which is cheaper to produce.

Definition Of Cavity Back Irons

Cavity back irons are a great choice for the beginner golfer as they’re fairly easy to use and offer a lot of forgiveness for errors.

Cavity back irons are much bulkier than blades which means they carry more weight behind the club face. This makes it easy to hit the ball very far regardless of the skill level of the player.

Although they don’t offer as much feedback or control as blades, pros do still use them when they need to launch a ball far along the fairway confidently.

Cavity back irons have a wider bottom which gives them more bounce meaning it’s easier to achieve longer launches than it is with blades. This makes it easy for beginners to hit the ball a long distance. That is why beginner sets like the Callaway Strata come with cavity back irons.

One of the main upsides of cavity backs is that they’re incredibly versatile and can be used by golfers of all ability levels. Both pros and amateurs alike can benefit from carrying a few cavity backs with them on the fairway.

Cavity backs offer far more forgiveness than blades when you’re developing your swing, and you won’t be punished as much for any errors that you make.

As cavity backs are cast rather than forged, they’re less expensive to make, which means they’re a more affordable option.

This is particularly beneficial if you’re a beginner who doesn’t want to be spending a fortune on your first set of clubs. The Callaway Rogue Irons are one great choice.

Although it’s much easier to launch the ball with cavity backs, controlling the distance you hit is a bit more challenging.

This is because shots that travel different distances will feel the same when using a cavity back as the weight is distributed around the club face, meaning that you don’t receive any feedback on miss-hits.

Cavity back irons offer you less control over your shot than a blade, as they’re designed to help you hit arching shots.

It is still possible to hit low shots with a cavity back, but you’ll need to spend a considerable amount of time adjusting and developing your swing.

Cavity backs have a larger and bulkier club head than blades, making them less sleek. However, the reason they’re designed this way is so that they’re easier to hit.

The larger club head makes it less intimidating for beginners when standing over the ball as it provides them with more confidence that they’re going to make a good connection.

Once again, this is purely a matter of preference, but many golfers consider blades to be the more attractive of the two irons.

Game improvement irons have a very similar design to cavity back vs. blade irons.

Depending on the weighing technology that the manufacturer uses, there can be slight differences in weight distribution, but generally, the design is essentially the same.

The club heads on game improvement irons are also on the bulkier side, which makes them ideal for beginners due to the prominent sweet spots.

They have many of the same benefits as cavity backs, such as being more forgiving and increasing the distance and height of shots.

Muscle back irons may look almost identical to blades, but there is a difference when it comes to weight distribution.

Muscle back irons are somewhere in the middle of blades and cavity backs when it comes to weight, as they have more weight in the bottom of the club than blades do but are still lighter than cavity backs.

Muscle backs will make a good addition to your golf gear if you’re looking to take your game to the next level. This type of golf club can act as a perfect bridge for transitioning from a cavity back iron to a blade iron.

Do Pros Use Blades vs Cavity Back Irons?

You may be surprised to learn that most professionals actually favor cavity backs to blades despite the fact that blades offer more feedback and control.

This is because a lot of pros have managed to master hitting shots with similar accuracy to blades while using cavity backs. However, for the most part, pros will have a mixture of the two in their bag.

Choosing The Right Set Of Irons

When ordering a set of irons, there are many other things to consider other than simply whether you want to use blades or cavity backs.

You should always try and make sure that your irons are custom fitted for your static measurements and that the lie angle, length, and grip size are suitable for you.

You should also consider whether you want clubs with steel shafts or graphite shafts and what type of set makeup will be most beneficial for your game.

You could consider replacing your long irons with hybrids and have a golf bag that’s just full of short irons like the 9 iron. Or, you could go for a traditional setup and have a 4-iron to pitching wedge bag.

Ultimately, you will want to have a setup that perfectly compliments your game, and this will be different for each individual golfer.

It’s well worth experimenting with different setups and trying out a wide variety of clubs until you find one that is going to help you improve your overall game.

As we’ve seen, both blades and cavity backs have a lot of pros and cons that will determine which type of iron you feel is more suitable for you.

If you’re looking for an iron that gives you maximum control, helps you hit low shots, and gives you lots of feedback, then the blade will probably be the best choice.

If you want an iron that is more forgiving, easier to hit, and very versatile, then the cavity back iron is most likely ideal for you.

Which one you choose will ultimately come down to your skill level and your personal preferences. So, now you have all the information you need to go and choose your perfect set of irons.

What Is Par In Golf? (18-Hole Scoring Explained)