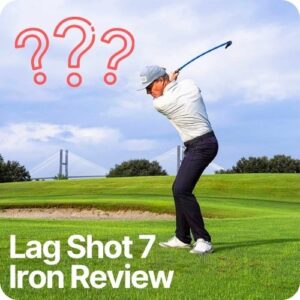 Very often, after a bad round, we will rush off and seek out a swing training system or device that we can use to improve our swing mechanics and help us play better golf – but, as a swing trainer, does the Lag Shot deliver everything it promises?

The Lag Shot 7 Iron is designed to help you build a better swing tempo, get the feeling of the club loading up on the backswing, get you in better swing positions, and help you develop a smoother swing, with a more consistent ball striking and hit the ball further and straighter more often.

What Is The Lag Shot 7 Iron, And How Does It Work?

The Lag Shot is essentially a 7-iron with a flexible shaft and heavy head and is designed to be used as you would swing a regular golf club.

Its primary focus is on developing lag, where the clubhead stays behind the grip or handle of the club and then passes the hands at impact.

Lag is the element in the golf swing that the pros use to generate immense power and clubhead speed. This element results in the massive distances they can achieve, but developing this skill and consistently applying it is a constant challenge for many weekend players.

In this video, 3-Time PGA Teacher of the Year – Adam Bazalgette demonstrates the concept of lag and shows the swings of PGA pros Ernie Else and Fred Couples to illustrate the use of lag in golf swings.

The ultra-flexible shaft forces the golfer to focus more on the feeling of the swing rather than the swing thoughts and makes them less likely to cast the club, which is where the clubhead is released before impact and passes the hands early.

This technique is the bane of existence for high-handicap players, and it is the main contributor to loss of distance, ball speed, accuracy, and consistent striking.

The Lag Shot 7 Iron creates a lag in your swing as the flexibility of the shaft and weighted head mean you need to wait for the club to reach the top of the backswing before starting the downswing, which creates better timing through the swing and ultimately a better golf shot!

One of the other benefits of the Lag Shot is that it helps smooth out the transition between the backswing and the downswing.

Many golfers can overswing or overrotate. Alternatively, they under-swing and don’t reach the top of the backswing before transitioning into the downswing and then trying to swing too hard to generate clubhead speed.

This leads to the casting effect or the over-the-top swing resulting in inconsistencies with accuracy and distance.

The Lag Shot gives you that feeling of ‘loading up’ at the top of the backswing and eases the movement into the downswing without the feeling of needing to swing at hurricane force to generate speed at impact.

This is how the pros and good ball strikers make hitting golf balls far look so effortless, and this is what the Lag Shot will do for your swing- if you use it correctly.

Shot feedback is a vital element in the game, and this is why many pros use and prefer blade irons in their bag, as the feedback from the club is immediate and accurate. They can then determine where a specific swing fault may occur and focus on resolving it.

One of the critical benchmarks with any swing training system or product is the feedback it gives you while using it. You can adjust and work with the trainer to achieve better results if you feel and see a difference during each swing, whether it’s on the swing itself or ball striking, shape, flight, or accuracy.

The Lag Shot does provide excellent feedback, and while some initial swings and shots may be real ‘duck-and-covers’. Golf writer Dave Wolfe at mygolfspy.com discovered that starting slow with the Lag Shot and then building up to full swing produces the best results.

Like most golfers, Dave simply whipped out the Lag Shot and started swinging with it but soon discovered that it would have been good to watch the enclosed video instructions first before having a full go.

This is because most golfers don’t create lag and don’t know how to, so when confronted with a lag swing trainer that is essentially a golf club, the natural reaction is to swing it as you would your regular 7-iron, except this isn’t a regular 7-iron and it certainly does not swing like a regular 7-iron.

After taking some half swings to get used to the feeling of the Lag Shot, Dave started to find some tempo and rhythm, which allowed him to start making better contact and progress to full swings.

He saw far better results, and then, taking his standard 7-iron out, he could feel that he was hitting better shots and achieving those ‘pure’ strikes by the end of his session.

How And Where To Use The Lag Shot 7-Iron?

With many swing training aids, you may find you are limited to where and how you can use them. If they are ball-striking-based products, you need to be hitting balls, but with Lag Shot, this is not the case.

Too many golfers focus on the hitting part of the golf swing and invest copious amounts of time and energy at the range, hitting bucket after bucket, but this often does more damage than good.

The Lag Shot focuses more on developing the ‘feeling’ of your swing, and if you speak to coaches and players, you will often hear this as the focus rather than the that of striking.

One of the significant advantages of the Lag Shot is that you don’t actually have to hit balls to benefit from a training session.

Because the Lag Shot forces you to focus on your swing ‘feeling’ rather than the ‘hitting,’ you can use this indoors or outdoors and spend some time developing the timing, tempo, rhythm, and sequencing in your swing, rather than constantly putting yourself under ‘hitting’ pressure.

The Lag Shot comes with ten training videos from Adam Bazalgette, and these are informal, fun, and easy to follow, and it is recommended that you take the time to watch them before starting to use the Lag Shot.

Basically, it comes down to ‘reading the instructions first so you can get the most out of the Lag Shot in your first session without coming back and watching them because your training didn’t go reasonably well as expected.

Practice With The Lag Shot 7-Iron At Home

If you work from home and need a break, instead of taking your SW and hitting some balls in the garden, which could get your better half’s blood pressure up to dangerous levels, take out the Lag Shot and take 20 or 30 minutes to swing outside.

Investing time in developing the technical elements of your swing without the pressure of hitting balls is time well spent.

It will produce good results when you go to the range as your focus will be on replicating the smooth swing, and you should be less tempted to try and smash the cover off the ball.

Using The Lag Shot 7-Iron As A Warm Up

Many golfers either don’t warm up before playing or don’t warm up properly before getting on the course or the range and then wonder why it takes them an hour before they start playing golf or hitting balls properly.

The Lag Shot is a great warm-up tool as you can start with shorter swings while limbering up and then move to the full power swings before hitting a few practice shots before teeing off or starting your range session.

It’s ironic that most golfers at the mid and high handicap levels don’t warm up properly or don’t see its value, while the best golfers in the world invest heavily in warming up.

With the Lag Shot, that excuse is no longer viable as you don’t need a lot of time or even a range to use it and get your body moving correctly before teeing off.

You can keep the Lag Shot in your bag without incurring penalties as it is not a golf club and would be the same as using other swing trainers like the Orange Whip to assist with swing tempo and timing.

Does The Lag Shot 7-Iron Work?

Cory Olson, a writer at practical-golf.com, feels that this club is one of the best training aids available as it helped him achieve a better swing feel in his game, and he can see it being part of his training for years to come.

Lag Shot’s claim around ’12 Swings to hit pure shots should be viewed as marketing hype rather than fact.

However, this should not detract from the effectiveness of this club and its core function –which is to assist you in developing a better golf swing and ultimately improving your ball striking, distance and accuracy.

This product will deliver results provided you use it as intended. When training, do not get lazy or shoddy; this will never produce tangible positive results with any training aid.

And you don’t have to worry about its durability either, as it stands up well to range mats, grass, and the rigors or range balls without any issues. The shaft is solidly made, as is the grip and clubhead, and Lag Shot has ensured that it will endure the golfing test of time.

The Lag Shot has a recommended retail price of $119 and, unlike any teaching pros we’ve ever heard of, has a 30-day money-back guarantee and is available here.

The Lag Shot 7-Iron is a simple but effective swing aid, and it focuses on the development of the swing as a feeling.

It will improve your swing mechanics, timing, and sequencing with a training plan and as a warm-up tool. With relatively little time invested, you will see improvements in accuracy, distance, and consistency, which every golfer truly wants.

Best Face-Balanced Putters: We Tested 5 For This Season

Why Do Golf Announcers Whisper? (And You Should Too)