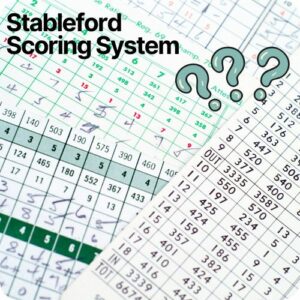 I love the game of golf. It is a fun sport that is engaging and exciting at all levels of play. Plus, it’s a game you can play, no matter how old.

As I continued to play golf, I became interested in other formats for scoring beyond the traditional stroke and match play.

During my exploration, I came across the Stableford scoring system. This variation also assigns scores based on the number of strokes you need on a hole.

When I talked to my friends about it, many were unfamiliar. I have a great deal of fun playing this system so I will share my knowledge with you.

By the end of this article, you will know the ins and outs of the Stableford system, and you can use it for the next 18 holes you play with your friends.

The Stableford scoring system gives a golfer points based on the number of strokes needed for each hole. You base your score on the par for the hole.

Unlike stroke play, the objective of the Stableford system is to score more points.

The points values for the Stableford system are:

A fun aspect of the Stableford system is that you and your buddies can set scoring as you please. You can make double bogeys worth negative points, or you could make a birdie worth five points.

Adjusting the scoring system can encourage aggressive play, making an afternoon on the links much more exciting.

History of the Stableford Scoring System

Dr. Frank Stableford invented the Stableford scoring system in 1898. Dr. Stableford was an English golfer who wanted to find a way to keep golfers engaged for the entire round.

Using this system, he found that golfers were more likely to finish a round even if they didn’t have their best game.

The Stableford system was first used in a competitive setting in 1911. It has been used in professional golf occasionally, but it is most popular among weekend warriors and social golfers.

How the Stableford System is Used

Now that you know how the Stableford system works, it’s time to learn how you use it in a round of golf.

You play the Stableford system with a group of two or more golfers. Each golfer plays their ball, and the group keeps track of everyone’s score.

At the end of the round, the individual with the most points is declared the winner. In case of a tie, the prize is split evenly among the winners.

What is a Modified Stableford?

You should be aware of a few variations of the Stableford system. You play the most common variation with a team of two golfers.

In this version, each team has one score per hole, and the total points are tallied at the end of the round. The team with the most points is declared the winner.

Another common variation is called “Nassau.” In Nassau, there are three different prizes that a golfer can win:

– Overall Low Score: This is the traditional way of scoring a golf game. The golfer with the lowest score at the end of the round is declared the winner.

– Front Nine: The golfer with the lowest score on the front nine holes is declared the winner.

– Back Nine: The golfer with the lowest score on the back nine holes is declared the winner.

The Nassau variation is a popular way to add some excitement to a round of golf. It also allows golfers to win more than one prize.

Also our article on the Wolf golf game, which has a different way to keep score.

Playing the Stableford scoring system is a lot of fun, but it can be challenging if you want to play handicaps. Handicaps can result in a lot of math, which is the last thing I want to do while golfing.

Fortunately, there is an easy way to play the Stableford system with handicaps. The first step is to figure out what the par for the course is.

Once you know the par, you can subtract your handicap from the par.

Once you know the par for the round, you can use the Stableford scoring system to keep track of your points.

If you are playing with a group of golfers, each golfer should subtract their handicap from the course’s par.

The individual with the most points at the end of the round is declared the winner.

There are some commonly asked questions about the Stableford system.

If I play the Stableford system, how do I score points?

To score points in the Stableford system, you receive a certain number of points for each stroke you take. The round winner is the individual with the most points.

How do you score points in stroke play?

In the traditional scoring system, you receive one point for each stroke you take. The round winner is the individual with the lowest overall score.

Are there other scoring formats?

There are many different scoring formats that you can use in a round of golf. Some of the most popular include stroke play and match play. These two forms are the two most commonly used in golf.

The Stableford system is a great way to keep things interesting on the golf course. It’s a scoring system based on points that can be adjusted to fit your group’s needs.

I enjoy playing the Stableford method. It is a great way to encourage aggressive play and make an afternoon on the links more exciting.

Why Do Golfers Yell Fore? (Plus What It Means)

Can You Play Golf Barefoot? (And One BIG Downside)