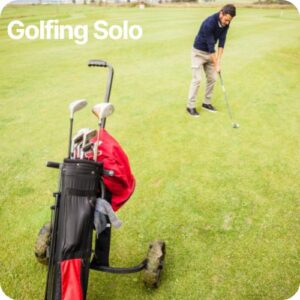 There are always times when you feel like hitting the golf course only to learn that your buddies don’t have the time.

After all, life gets busy for us all at times, right?

Whether it’s being unable to get childcare, that looming work deadline fast approaching, or simply not feeling the lure of the green; your friends can’t always be expected to be on call whenever you want to show off your prowess on the course.

Of course, there’s always the driving range, but sometimes it doesn’t hit the same (pardon the pun).

Hear us out on this one.

Playing golf alone has some great benefits (plus some downsides, but we’ll get into that in a minute), so if you want to improve your game, it’s something you might want to seriously consider.

I’ve hit the golf course solo myself on many occasions, and let me tell ya, I’ve played some of my best rounds when I haven’t had to deal with the bureaucracy of several people arguing over the best way to play a ball out of the bunker.

Let’s delve into the benefits – and downsides – of playing a solo round or two of golf.

Cut the small talk on the course and discover five brilliant benefits of golfing solo below.

Playing solo takes the focus off how everyone else is playing and puts the onus firmly on your own game. Having 100% concentration on how you play the course lets you focus on the precise task in front of you.

Plus, if you mess up – which everyone does at some point – you aren’t going to feel embarrassed or self-conscious when the game doesn’t go exactly as planned. After all, there’s no one to impress, except yourself, that is.

Having this freedom to be absolved from scrutiny, no matter how jovial it may be, can make your game so much better.

When the pressure is off, you are free to play the game your way, without compromise or restrictions, so you’d be surprised just how quickly your quality of play can improve.

While anxiety, stress, or nervousness can affect us all in different ways, those who suffer from serious bouts of stage fright on the course can always benefit from a round of golf without playing partners.

Plus, it can help increase confidence, too; once you see your capabilities away from your curious playing partner/s, you’ll begin to see exactly how you can score some great shots and drastically overhaul your game.

While I play best as a solo golfer, it can be difficult to get your friends to believe you when you tell them about those miraculous chip-ins or that insane putt that defied gravity.

I suggest a GoPro for gathering evidence. And, any bad play can simply be swiped – win-win!

The best way to improve your game solo is by practicing. Don’t be expecting that you’ll be the next Rory McIlroy because you played 18 holes in record time on your own.

Invest some serious time on the course in order to make your game as good as it can possibly be.

While life is busy, it’s also consumed with social media, text messages, voicemails, and a plethora of tech. This stuff gets addictive and can often be extremely detrimental to our mental health.

Getting away from it all and focusing on a task out in the fresh air, getting your body moving as well as being free from the headspace of responsibilities can do wonders.

Playing golf by yourself can be peaceful, calming, and liberating. Try to take time throughout the course to practice a bit of mindfulness.

Do this by appreciating the here and now, and NOT what you are going to feed the kids for dinner or when you are going to start work on that all-important presentation that your boss keeps demanding.

Being in the midst of nature in the peace and quiet (hopefully) on a quiet golf course can really help remind you of what’s really important in life.

Just make sure to turn your smartphone off before you hit the course to ensure there are zero distractions.

Speed up the game

Admittedly, playing with other golfers does have some perks, but a quick game of golf is definitely not one of them.

A sizable amount of time spent playing with other golfers is taken up with waiting for others who have played a dismal shot and are searching for their ball or have hit the bunker and still can’t quite manage to get it out after three shots.

Finishing a game quicker is a huge bonus to solo golf play. Playing well, you can expect to finish the course in literally half the time that it would usually take you. After all, it can take long to play a game of golf.

There are exceptions, though.

Nothing worse than being stranded behind a large group of golfers taking their next shot.

Common decency, however, would dictate that they’ll allow you to play through, so it shouldn’t be too much of a problem in most cases.

Taking a game of golf at your own pace means there’s lots more opportunity to get in some vital practice shots.

When you play golf as a social game, everyone is in a hurry so as they don’t hold anyone else up (not that it works all the time) but playing golf alone often means you can take lots of retakes from various positions.

This will allow you to build consistency without being conscious that there’s someone behind you itching to take a shot. Overall, using this alone time on the course can help you to become better at golf.

When your approach shots are well off the mark, you can take multiple shots, which will give you a great idea of what you need to improve on and how you can do it.

If you don’t want to extend your practice to the entire course, you aren’t governed by group consensus to feel obliged to do so. If you want to play six holes, you can; the choice is entirely yours.

Test your metal with risky shots

Admit it; when you’re playing with your buddies or work colleagues, whoever it may be, you find yourself dulling down your game and playing it safe in order to avoid risks. If you’re anything like me, you do.

When it’s just you, you can throw caution completely to the wind and play golf with a riskier strategy.

This all leads to growth in your game and will ultimately make you better at golf.

What’s the worst that can happen? (Besides yelling fore if you hit a bad shot…) You throw down the ball and have to take the shot again. So what?

When playing a social game of golf again, these solo strategies can give you the confidence to attempt riskier shots when in a group, and you’ll be safe in the knowledge that you potentially stand a good chance of it paying off.

While there are undeniable perks to golfing on your own, there are also a few downsides. Let’s delve into these now.

When golfing on your own, the rule is you let groups of golfers play through, even though it’s going to take them way more time to complete.

Although an unpopular rule, it’s not like many golfers are going to allow you to stand there and wait for them to have their turns. The rule is only fully enforced in certain circumstances, and more likely than not, a group will let a solo player go before them.

The witnesses to your play through

My last point leads on to another difficulty of playing alone. If a group is good enough to allow you to go first, they’re going to be watching you take that shot you were so desperate to get in front of them to complete.

And, let’s be honest, they possibly might think you’re already strange enough for playing on your own and, coupled with their intense glare as you play through, well, it’s not good for the ego.

Other groups of golfers may not be used to seeing solo individuals playing a round on their own. That’s not to say there aren’t many of us who do it – but brace yourself for some slightly bewildered looks.

Not that this should bother you in the slightest. (Unless you are playing golf barefoot that is…)

After all, they are the ones having to put up with Dave from the office’s terrible jokes and nightmarish putts. You, however, are completely free to do exactly how you please.

Think of yourself as a golfing trailblazer, cutting a path for all those who are too self-conscious to hit the green solo.

Playing golf solo isn’t always possible. There are quite a few golf courses that will insist that you are paired up with someone else or even placed in a group so you can play as a foursome.

From the viewpoint of the course bosses, this is hugely beneficial, allowing a faster flow through their golf course and raking in more money as a result.

Depending on how much you enjoy the company of strangers, you might have a great time and even make new golf buddies for life; many golfers have.

If you are paired with someone more seasoned than yourself, or worse, the game just won’t flow, and you’ll end up not having the most exciting round.

But, if you are lucky enough to get paired with someone of a similar golfing skill set to your own, you might just be surprised as to how much you enjoy it.

It also gives you the chance to pit your skills against new people and provide a measure of how to improve your swing. You can also start a conversation by exchanging handy golfing hints and tips.

By far, the most disadvantageous aspect of golfing on your own is that any gains made will not count towards your official handicap.

By all means, practice away on your own, but any successes aren’t going to count – oh, you hit a hole in one on a Par 3? Too bad! It will not count towards your handicap in a solo golf game.

Ok, so you know you achieved it, but to make it official, others have to be witness to it.

Which, I’m not going to lie, sucks.

While golf is undoubtedly a social game, taking time for yourself when your mates are busy and experiencing a course solo can be life-changing when it comes to the quality of your game.

But, not only can you play better golf as a result of honing your skills on your own, you can avoid the small talk and really take in the game and the scenery in which you are playing.

And, now, of all times, we all could be doing more to protect our peace of mind. What better way to do this than by building confidence, enjoying your own company, and embracing the stunning natural surroundings that most golf courses have to offer.

Yes, there may be disadvantages to playing on your own, but I’m sure you’ll agree that the benefits outweigh those few pesky downsides.

Why Bird Golf Academy Is The Best Florida Golf School